April 24th Laila was discharged from her last ever hospital visit.  May 2nd she turned nine years old.  May 22nd she went home to be with the Lord.  Today is June 20th.

I had been thinking during the month leading up to Laila’s birthday that we should have a party for her.  She had never had a party like the other kids had.  We always celebrated with family, and sometimes a few family friends, but nothing like the other kids have had.   It was so hard to plan something in advance, never knowing what her health would be like.  And honestly, she had only ever been invited to two school friend’s birthday parties ever and one was just a week or so ago which she didn’t live long enough for.

So, sidenote that deserves it’s own paragraph….. INVITE SPECIAL NEEDS KIDS!!  They like to have fun too!

Anyhooo….. we decided that this was the year to make her birthday extremely special.  But what to do?  We had originally thought bowling because our local place has a little ramp thing that she was able to use.  But honestly her strength was low and I wasn’t sure that would work.  After tossing around a few ideas I thought I better just ask Laila.  She said “I want to go to Wheatfield!”  If you remembered from an earlier blog, it had surprised me that she hadn’t been asking to go to school but when faced with the choice of anywhere at all she wanted to go for her birthday, she said Wheatfield Elementary.  I should’ve known :)

I threw the idea out at my good friend, who happens to be the secretary and she said “I bet Mrs. Vollmer (the principal) would give that girl anything she wants.”  She was right :)

Plans went into motion for a princess party.  Laila, Emma and I had gone to see the new Beauty and the Beast movie at the theater and it was the only movie I ever remember Laila actually enjoying at the theater.  So when posed with the question of a theme she chose princesses, Belle in particular.  This all came into motion on a Friday morning and her birthday was the following Tuesday.  We had some work to do.

I knew her time was limited.  Not SO limited but I was fairly certain this girl was never going to have another birthday. So this had to be grand!

I told the school I would take care of everything as long as they would give me a space.  I set to work calling around everywhere trying to find a face painter and deciding whether or not to trust Amazon Prime to get the decorations there in time.  But the dress….. Oh the dress.  Grandma decided she must have the best princess dress ever.  Which of course meant a trip to the Disney Store.  With Laila’s frailty I called my friend and asked if she could be a car babysitter so I could take a trip to the mall.

When we got there Laila demanded that she was going in too :) I was so thankful she had the strength for that.  Melissa and I had so much fun running around the store with her and figuring out just the right dress, and shoes, and cell phone case… and anything else she wanted because grandma had no budget for her special girl…. thank you grandma :) 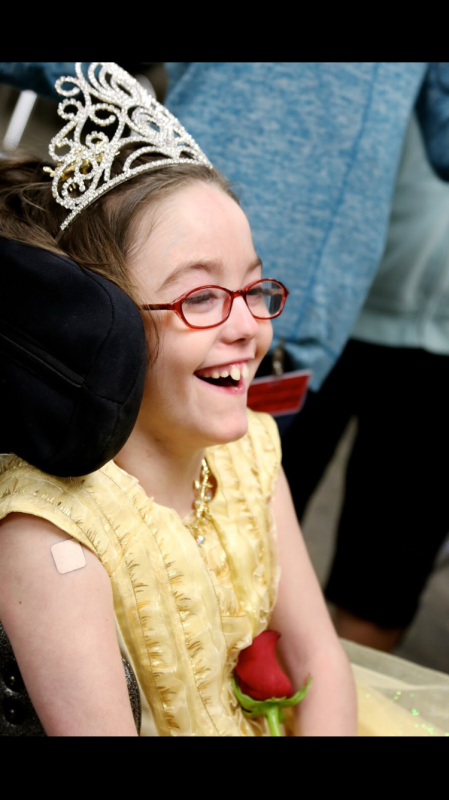 Everything came together.  Of course it did, because it was very important.  How important, I did not even realize.

Tuesday rolled around and it was the day.  My baby turned nine years old.  She grew up so much in that ninth year.  Her looks changed, she grew so much wittier, she had a lot of life under her belt in that last twelve months.

She and I were home alone getting ready for the party.  I set up people to help with everything so I could stay home so that she could nap and I could take her there at the last possible minute.  Saving every ounce of energy she had for finally seeing all of her beloved friends for the first time in a long time.  I slipped her gorgeous dress over her head and picked her up to pull down the back and just held on.  In that very moment God made me very aware to soak it in.  I was never going to dress her for prom or her wedding.  Not to miss that very moment that I would never get back.  There were a lot of things that I did not realize would be her “lasts,” but this I did.  I held her a little longer and cried and sniffed her in.  And then out of nowhere she said “mommy, this is a dream…..” in such a wonder eyed voice.  It was one of the most perfect moments and I will never forget it.  Yep, I’m sitting here sobbing just even thinking about it.  Man, I miss her.

We got to school and everything was all set and everyone was waiting for us.  She squealed as we rounded the corner and yelled “WHEATFIELD ELEMENTARY!!” like she always did when I would drop her off after therapy.  She could barely handle herself as we walked in the door and almost immediately Mrs. Ward called Miss Crystal’s phone and Laila knew she was back at the work of stealing that secretary job ;)  Just look at her face! 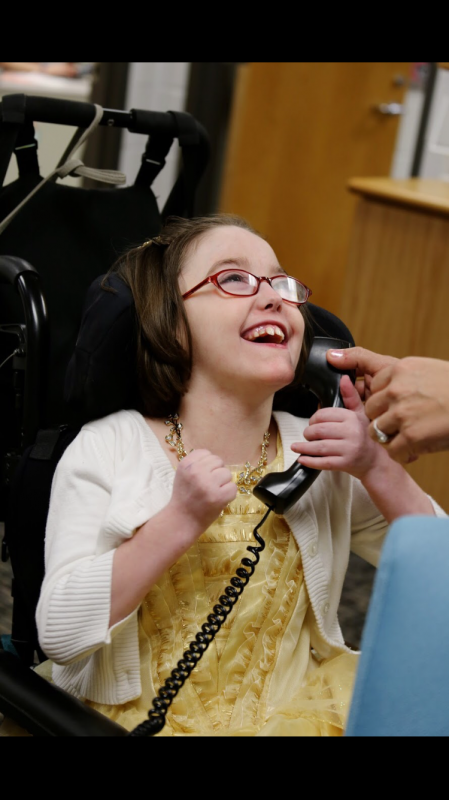 Just as I had asked, the teachers set up to file kids in and out a little at a time so Laila wouldn’t get overwhelmed.  She was so excited to see all of her friends.  Laila was especially worried about where all of her special friends were and that they were being taken care of at her party.  Little Mother Hen.  Even her buddy Cole came and her best friend Zoe and that was a  good thing because she was the life of the party making Laila smile for every picture, even when her strength was fading.    The face painter was amazing, the staff was loving and so excited to see her, all the kids told her how beautiful she was…. The KVHS prom queen even sent her crown for Laila to wear and then Laila’s buddy Trent came dressed in his cute little prince outfit and they looked like the little prom king and queen.  I always told Angel that Trent better be the nice guy who takes the special girl to Prom, we just didn’t get that far.  But they do look cute don’t they? 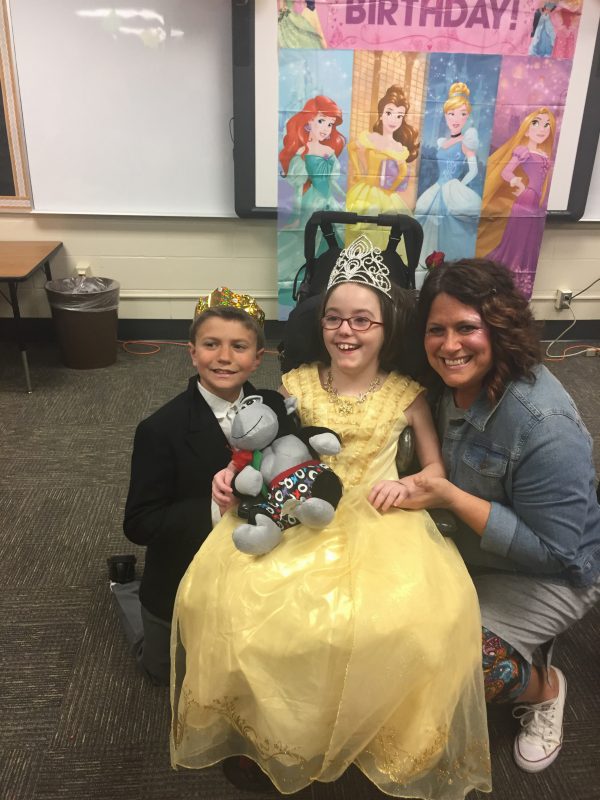 One other big surprise was that right after we got there a special guest walked in……. 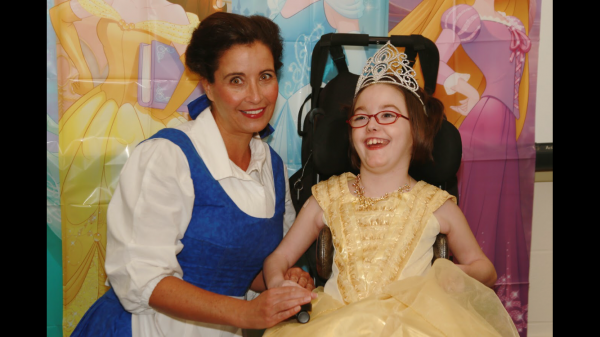 The school set up for a real life Belle to come and share Laila’s special day with her.  She even sang to her which was so fun and special.

Mrs. Maze brought in the library cart so Laila could get back to work checking in books with her.  She always loved to have a job and it was so good for her on so many levels. 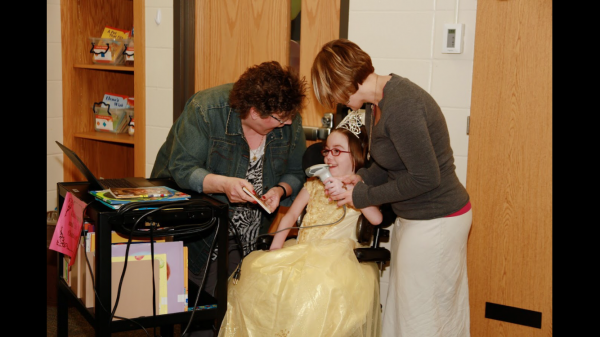 I’m so thankful for these things that God laid on my heart to do with her.  I honestly have no regrets when it comes to stuff like this.  He was so gracious to give me insight and warning of time drawing near.  You can never, ever be prepared for something like this but I’m thankful for memories like this and having my eyes so wide open to how much God loved Laila and how much he loves me.

She will forever be His princess.

1 Peter 2:9 But you are a chosen people, a royal priesthood, a holy nation, God’s special possession, that you may declare the praises of him who called you out of darkness into his wonderful light.

Thank you to Dina Lynn Photography for catching all these beautiful candid pictures for us!! 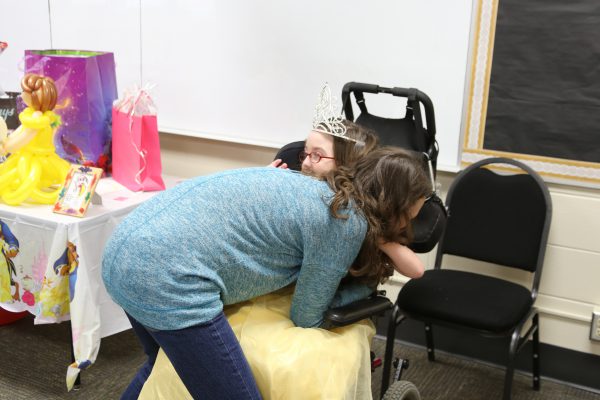 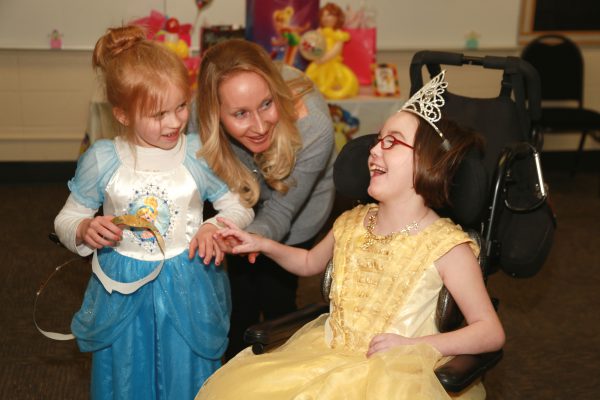 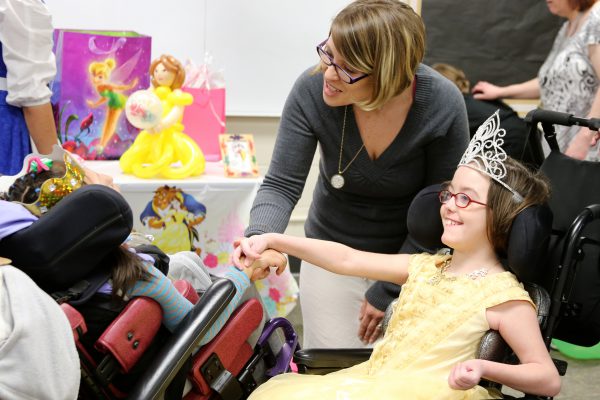